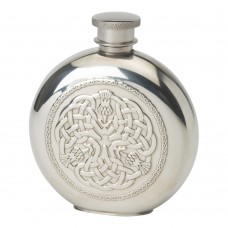 1 in stock (can be backordered)

This lovely Celtic Thistle Pewter Flask is made in England from 100% lead free pewter.

In the language of flowers the thistle is an ancient Celtic symbol of nobility of character as well as of birth. Steeped in history and legend, in the oral tradition the story is told that one simple Scottish Thistle is said to have saved an entire Scottish army and the country of Scotland as a whole. As the legend has been told, a sleeping party of Scots warriors were saved from ambush by an invading Norse army when one of the enemies trod on the spiky plant. His anguished cry roused the slumbering warriors who duly vanquished the invader and adopted the thistle as their national symbol.

There are no reviews yet.